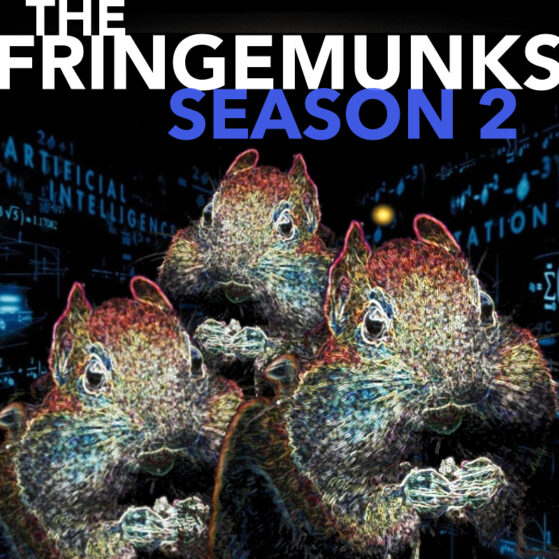 The Fringemunks – Feebo, Notchy, and Pie – have teamed up with David Wu to recap each episode of the sci-fi TV series Fringe with a song parody.  This first entry contains all 20 original Season 1 episodes, plus the “lost” episode “Unearthed” that was not broadcast until mid-way during the second season.

1.01: PILOT – The Fringemunks
Parody of “American Pie” by Don McLean
Parody Lyrics and All Instruments/Production by David Wu

A long, long week ago,
I can still remember when that agent used to make her smile
And I knew there was not a chance
That they’d disclose their sweet romance
And, maybe, they could hide it for a while

John Scott caught that see-through bug
At that storage space where that bomb went off
Olivia only bumped her head
Could that hospital really save John? No!
Dr. Bishop was the only hope
And Peter, his son, was the only way to obtain him

He was trying to hide from old Big Ed
Had to stay in Baghdad, or he’d be dead
An FBI file he earned (Olivia lied about it!)
So he sucked it up, and returned, oh!

They reunited at the facility
Dr. Bishop shaved, and then was free
And so began the team of three
Before the agent died

Pete, Liv and Doc had their debates
‘Bout combining Liv and John’s dream states
Peter thought they were insane
But the Doc he did it! I don’t know how
Nor did Astrid Farnsworth or Gene the Cow
But Liv’s and John’s dream waves, they turned the same

Then Olivia made a computerized picture
Of Passenger 108’s twin named Richard
The hunt was on, and they caught the man
Before the agent died

And I was singin…
CHORUS

They found the stuff to save John Scott
… It turns out it was all for naught
He got well, then killed Richard Steig
I locked down the hospital room and then
John Scott drove off in a darkened van
That two-faced man, he almost got away

But Olivia chased him far
And John Scott, he crashed his car
Then John told Olivia: “Ask yourself
Why Broyles sent you to the storage cell…”

And the trio we’re pinning out hopes on
The father, son and liaison
Decided to keep their basement zone
The day the agent died

The club isn’t the best place to find a loverSo the bar is where I goMe and my friends at the table doing shotsDrinking fast and then we talk slowCome over and start up a conversation with just meAnd trust me I’ll give it a chance nowTake my hand, stop, put Van the Man on the jukeboxAnd then we start to dance, and now I’m singing likeGirl, you know I want your loveYour love was handmade for somebody like meCome on now, follow my leadI may be crazy, don’t mind meSay, boy, let’s not talk too muchGrab on my waist and put that body on meCome on now, follow my leadCome, come on now, follow my leadI’m in love with the shape of youWe push and pull like a magnet doAlthough my heart is falling tooI’m in love with your body

The club isn’t the best place to find a lover
So the bar is where I go
Me and my friends at the table doing shots
Drinking fast and then we talk slow
Come over and start up a conversation with just me
And trust me I’ll give it a chance now
Take my hand, stop, put Van the Man on the jukebox
And then we start to dance, and now I’m singing like
Girl, you know I want your love
Your love was handmade for somebody like me
Come on now, follow my lead
I may be crazy, don’t mind me
Say, boy, let’s not talk too much
Grab on my waist and put that body on me
Come on now, follow my lead
Come, come on now, follow my lead
I’m in love with the shape of you
We push and pull like a magnet do
Although my heart is falling too
I’m in love with your body